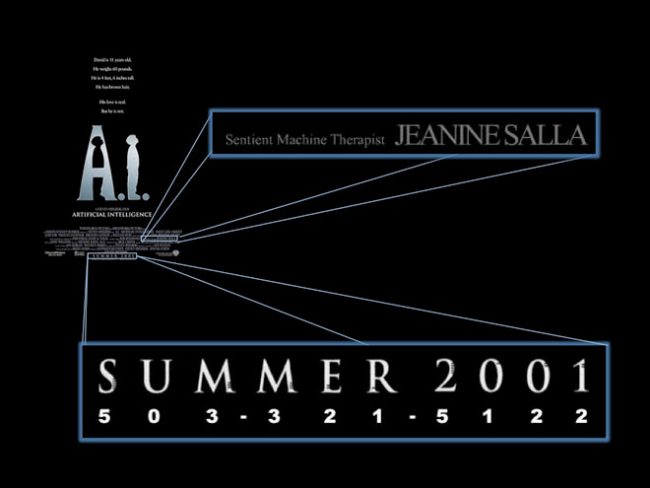 This is how the digital age wants to tell stories.

I had no idea at the time, of course.  At the beginning of 2001, visionary genius and all-around nice guy Jordan Weisman invited me to be the lead writer on a project designed to generate interest in the world of the upcoming Steven Spielberg movie, A.I.:  Artificial Intelligence.  I didn’t know it at the time, but I had just fluked into the chance of a lifetime – to get in on the ground floor of what might be a signature art form of the 21st century.

Jordan’s idea was that we would tell a story that was not bound by communication platform: it would come at you over the web, by email, via fax and phone and billboard and TV and newspaper, SMS and skywriting and smoke signals, too, if we could figure out how. The story would be fundamentally interactive, made of little bits that players, like detectives or archaeologists, would discover and fit together. We would use political pamphlets, business brochures, answering phone messages, surveillance camera video, stolen diary pages…

…in short, instead of telling a story, we would present the evidence of that story, and let the players tell it to themselves.

The very first asset list ever compiled for the game contained 666 items, so we nicknamed it The Beast.

– taken from Collaborating with the Audience: Alternate Reality Games (2006)

Wikipedia page for The Beast