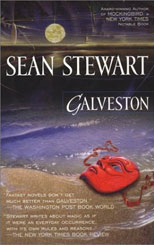 Magic came back and the modern world pretty much collapsed.  But on the island of Galveston, just off the Texas coast, one small city keeps the monsters and miracles at bay.  They can still nurse a little power out of an old car battery, or draw fuel from the abandoned oil rigs out in the Gulf.  But the generation that remembers life without magic is passing, and their children must brace for the storm…

“In an intricately imagined 21st century Texas where magic has preempted technology, the island of Galveston is a haven of nonmagical stability. … An engrossing psychological drama, a lesson in poker technique, and a survival manual all in one, Stewart’s new novel is not only terrific fun, but will send shivers of recognition down many a spine.”—Publishers Weekly

“GALVESTON may be just slightly too calculating, too much in control of its generic material, to count as one of the ten or so fantasy novels one might fairly describe as the greatest ever written, but it comes awfully close. … GALVESTON is a book that signals the growing maturity of one of the two or three best authors of fantasy now active.”—John Clute, The Washington Post