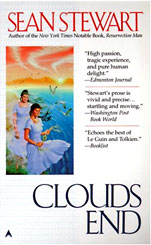 On an island near the edge of the Mist, Brook watched as a woman emerged from the clouds. She stood face-to-face with her twin—and her destiny. Tied to an irrevocable fate, Brook joined her twin on a perilous journey that would take them far from home, where they would become part of a story much bigger than themselves. Two women—spawned from the same soul–caught between the unreachable sky and the unfathomable sea. . .

“Stewart doesn’t make it easy for the reviewer to suggest the special wonders of Clouds End without blurting raves. Well, so be it: with this book, he has written an astonishing, wise, beautiful work, full of the terror and wonder and love and power of life and legend intertwined.”—Locus

“The extraordinarily gifted Stewart has forged his reputation with his striking novels of magic realism, each better than the last… Stewart’s beautifully lucid, poetic prose makes for a narrative of commanding power and enchantment that echoes the best of Le Guin and Tolkien.”—Booklist