ARGs were like concerts:  big events for lots of people that unfolded over a few days or weeks.  Fourth Wall Studios set out to make “albums” – shorter, more contained experiences a single person could have by herself.

Our first project was Eagle Eye: Free Fall. Years later I still think this 10 minute experience puts you in the world of Eagle Eye in ways even the movie could not.

That was the point of Rides.TV – creating transmedia TV shows that could commandeer the channels of your life to help bring you a story.  For example, we made a pilot for a show about a telepath, Claire; while you watched on your screen, you could hear other character’s thoughts on your phone.

In less than two years we made a dozen shows, including three half-hour episodes of Dirty Work, the transmedia comedy for which we won a Primetime Emmy award.  The writing was funny, profane, and surprisingly moving.  I would love to take credit for it, but that goes to John Newman and Aaron Shure. 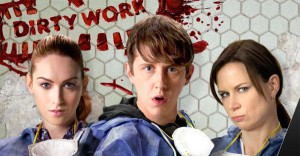